Duncan Sherwin kicked off the conference with a powerful message on money. Some of his comments on trusting God and not money, and putting money into context (the word money is in the Bible more than the word faith) and showing us how to relate to money was brilliant.

Then for the second session of the night, John Maunder shared on how we are all WORTH IT!  Because of the death of Jesus for us, we are loved.  More people lose out on their financial increase because they don’t realize how loved they are, and how blessed they are and how adored they are.

It was a powerful evening and a great start to the conference.  Looking forward to tomorrow so much!

For some reason many people use “making disciples” as a code phrase for “being the church policeman/ being a bully for Jesus”.

Making disciples was never about investigating people’s lives to make sure they come up to our high standards – it wasn’t even about ethics. It was about training people to create masterpieces.

In the ancient Greek world, a skilled artisan would take on some young helpers – disciples, who would watch him work, watch him create, watch him make works of art, find out how he found his inspiration, how he handled the tools, how he turned a block of marble into a statue, how he combined paints, how he rested, how he worked, how he made decisions.

Making disciples is when a Christian – a masterpiece of God designed to work masterpieces – who is fruitful, who is changing lives, healing the sick, ministering grace and life to people, lays down His life into younger, more inexperienced people and loves them enough and sacrifices enough of his privacy and time so they can see him heal the sick and find out how he does it, see him preach and realize how he does it, see him change lives, see him deal with criticism, with praise, and learn how to heal the sick and cast out demons and speak in tongues and extend the kingdom of God on earth.

It has nothing to do with looking at those who can’t and critiquing their decisions and habits from our ivory towers. It has to do with getting your hands dirty and living the life in a transparent way that others can model it.

Of course – if you aren’t doing anything worthwhile no one will ever want to model it! Then of course you need to criticize and attack them because otherwise people will see the Emperor has no clothes and realize you can’t do the stuff in the Word. So quickly attack the people who don’t want to be your disciple, and tell them they are rubbish and don’t care about God, and have no heart for the kingdom and that they are not disciples and just converts and whatever. It should deflect from people realizing you are naked.

On the other hand you could clothe yourself in righteousness, realize who you are, and do the works of the kingdom. Then people will crawl over broken glass to be close to you and be with you, and you won’t have to lie to discredit them.

Of course if you are not skilled at what you do no one wants to be your disciple! It’s a simple thing but one you need to realize. The quality of discipleship does not depend on the novice, but on the skill of the master.

Racism is defined as treating people differently on the basis of nationality or outward markers of ethnicity.  Still racism is an issue in the world and the church today – people are neglected, ignored, devalued because of their nationality and ethnicity.  Jesus said His vision is for His house to be a house of prayer for all nations.

The Greek word for nations is ethnos, which we get our modern word ethnicity from.  God wants the church to be a place that people from every ethnic background can get together and worship and spend time with Him together.  A Father of love, loving His family of many backgrounds!

It’s time to stop seeing people through the eyes of race, and look at people through the eyes of grace.  Time to become a bunch of gracists.  Only looking at people assuming the best, ignoring their sin, bypassing their flaws, and looking at their potential, their strengths, their loves, their passions and valuing them as unique and special – not just special to God but special to you. 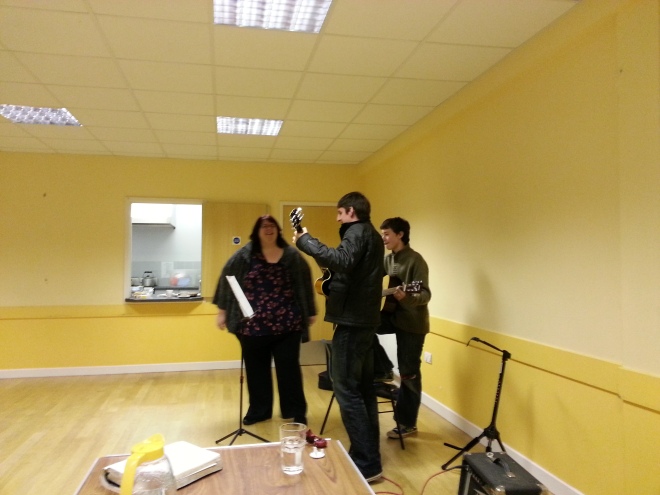 This is Anthony Conley, Joel Conway (my awesome son), and Amanda Shaw leading worship yesterday at our new church plant in Guildford…

This is a great message on sending people out and releasing people into ministry!

A sociologist, after studying the spread of Christianity across the world in several countries, said that there is no single more effective way of increasing the number of active Christians in an area of the world is to plant new churches.

As someone who has – as of last weekend – planted two churches in two very different areas, I think that is an accurate conclusion.  Church planting is effective – it attracts people who for whatever reason have not made contact with, or in worst case scenarios, been hurt by – the established churches in the area.  It raises the mood in the area and it forces you to focus on how to reach those who have never been reached.

Just reflecting back on last weekend, which I consider to be a total success, there are three things I have learned that maybe some of the wannabe church planters, or even those who just have an interest in these matters might want to consider.

Firstly, church planting starts off as maximum effort.  What made this weekend about fifty times easier than starting the Dagenham church was the number of people who drove hours and hours this weekend helping out, making teas, greeting people, sharing their lives, cleaning and setting out chairs, playing guitars, and doing all the stuff that needed to be done.  When we first started out Tree of Life in Essex, we did all that ourselves, and if we couldn’t do it, it couldn’t get done.  I think this really bears well when we  consider planting in Watford next year, as it means there will be even more helpers around to invest in the church plant.  That makes a massive massive massive difference.  My advice to anyone looking to plant a church is this: GET AS MUCH HELP AS POSSIBLE.  We had more people come to our first Healing Crusade (which was in Barkingside) than we did in the Guildford one, but we lost people because we did not have the structure in place to keep them.  Here, the people who came will be with us when we officially launch regular services in two weeks’ time because we did have the helpers.  Everyone who came and helped is absolutely awesome, and will get many, many rewards in heaven!  That’s awesome.

Secondly, the most important thing isn’t how slick you are but how much you care.  One of the realities about Tree of Life Dagenham is that as it is growing (another 100+ day yesterday, praise the Lord – five first time visitors, one of whom got saved, another got baptized in the Holy Spirit) things that were informal have to become formalized to cope with the growth.  Praise God for the Living Churches where you can still meet in a house and share the Word and teach and help one another and love each other.  That way we get the benefit of big and the benefit of small.  But when you are starting you are small.  Rather than hate that, use that.  You can say hello to everyone, find out everyone’s name, have some fun with everyone.  Use that to your advantage.

Thirdly, always celebrate every step of the way.  The first family, the first healing, the first salvation, the first baptism in the Holy Spirit.  Everything when you are new is just awesome.  They say with children you adore the first but enjoy the second.  I think it is the same with church planting, I am thoroughly enjoying myself in a way that I could not with Dagenham because it was so intense and everything was new.  This is fun, and I love it.