Do Yourself a Favour!.

(part of my new blog on Church leadership and planting, http://www.benjaminconway.net)

The Bible isn't for you.

The Oldest Trick in the Book. 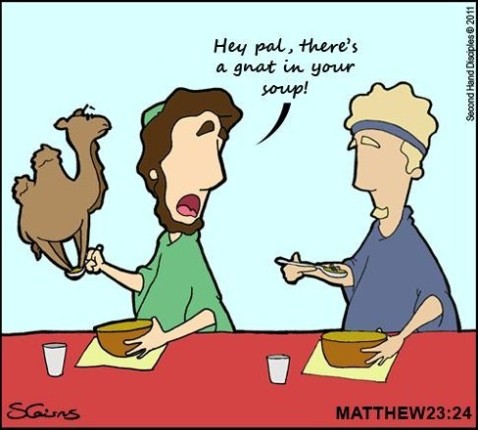 In Matthew 23.24, Jesus in His gentle and tactful manner tells the Pharisees “Ye blind guides, which strain at a gnat, and swallow a camel”.  The Pharisees would get upset and vitriolic at the most minor of things, but fail to see how areas of their lives and ministries were hugely out of whack with God’s heart and love.

The fact is there are still people out there today.  As I express the Biblical truths about healing, people will come at you and say “That sounds Christian Science-y” – of course these will be people who have never met a Christian Scientist, never read Ellen White, and don’t actually know what Christian Science is all about.  But someone told them this, they think it sounds wise so they strain at the gnat in your teaching.

Someone else might say “That sounds like Greek philosophy”, or the power of Words doesn’t work because I can’t confess I am married to a supermodel and have it happen tomorrow (the fact that doesn’t work is because their spirit has never been wired with faith for that to happen, but your spirit is wired for faith in healing and prosperity – the problem is the mind has been programmed for failure!).

They are straining at gnats, but missed the camel.  Here is the camel:  Jesus told us that we should do greater works than Him (John 14.12).  He told believers (not apostles or pastors or super-doopers, but believers – all Christians) to lay hands on the sick and they would recover (Mark 16.17).

The camel in the room is that Jesus Christ has given every single believer a healing ministry.  Hebrews 6.1-2 tells us laying hands on people is a FOUNDATIONAL and BASIC doctrine – the milk of the Word.

If you are not seeing the sick healed in your life and in your ministry.  If you don’t have some testimonies of people being healed because you laid hands on them and prayed in Jesus’ name, then you have a massive camel in your dinner.

You need to get on your face before God and ask Him for the wisdom to start seeing the sick healed in your life.  You need to dismantle some of your poor theology and thinking that leads to doubt and unbelief; you need to destroy the traditions that make the Word of God (that when sent healed the sick) of no effect.

You really don’t have time to go around correcting everyone else’s gnats until you sort out this massive camel.

If the church took this advice seriously, it would revolutionize our witness on planet earth.

This is a powerful message on how to flow in the gifts of the Holy Spirit in a more awesome way than you ever have before. Very simple, very profound, and very practical! Enjoy!

12 But he that is an hireling, and not the shepherd, whose own the sheep are not, seeth the wolf coming, and leaveth the sheep, and fleeth: and the wolf catcheth them, and scattereth the sheep.

13 The hireling fleeth, because he is an hireling, and careth not for the sheep.

14 I am the good shepherd, and know my sheep, and am known of mine.

15 As the Father knoweth me, even so know I the Father: and I lay down my life for the sheep.

But how do you tell if the pastor of a church is a good shepherd or a hireling?  Some pastors are quite definitely just in it for the money – it sounds crazy to those of us who know we could make a  considerable amount more money doing other things, but it is nevertheless a fact.  Some pastors are just in it for themselves and their career and their reputation.  Can we tell?

1. A good pastor lays down his life for the flock.  The implication here is whole life – not just 3-5 years.  If you want to know if your pastor is committed to shepherding the flock, ask him where he was 3-5 years ago and find out where he intends to be 3-5 years time.  If he is a hireling, he is probably already looking at the next step up – looking to get a bigger (and better?) church and get a promotion for putting up with you.  Good pastors stay with their flocks for decades.  They get a bigger church by growing bigger people.

A while back, when the Tree of Life Network was just one church and I wasn’t even earning a salary but working as a part-time postman to get some money in while pastoring, a church phoned me up.  They were a local church who needed a new pastor – and they were going to pay me twice what Royal Mail did, give me a company car and a manse to live in.  They were after me.  They phoned regularly.  Trust me – there was a moment I was tempted, but it really was just a moment.  My destiny is not determined by a company car, but by the will of God and my call is to the Tree of Life and the Network.  I will leave Tree of Life in a coffin and not before and not until!

I had a pastor recently ask how to get elders as committed as ours, I said the only way I know is to ensure the elders know that I am committed to them.  If they have served at the church for 30 years and you are the seventh pastor that they know – and they know you will be gone in 3 years, don’t expect them to cheer every time you want to change things!

2. The hireling does not own the sheep

Now I am not a fan of heavy shepherding – you know when the pastor micro-manages the life of the flock and tells them when to holiday and so on and so forth.  Not my scene at all, and that is not what I mean here.  What I mean is that there is a link between the pastor and the sheep that transcends other relationships.  You were the one who led them to the Lord, or you were the one who got them healed or baptized in the Holy Spirit.  Your teaching got them on fire, your teaching restored their marriage and healed their mind.  You own them in the sense that they are loyal to you.

The only way to have that happen is to go beyond what is normal and expected.  Hirelings do what is expected – they turn up at meetings, but they are not the first to arrive or last to leave.  I am the first to arrive on Sunday and the last to leave.  This week I have attended 4 Living Churches and the weekend will involve 3 meetings and evangelism – and I lead from the front.  Hirelings often lead from the back – they will not turn up at the prayer meeting, not be at the outreach.  They like the sermon bit because that is where they get the ego-massage, but they aren’t interested in people, just crowds.

If your pastor is the last to arrive, first to leave; if they are never at small groups and never involved in people’s lives – they may be a hireling.  If your pastor knows the people in the church (obviously dependent on church size how well they know people) and they are loyal to him then stick around, there probably will end up being a reason for you to be loyal.

3. HIrelings run from the wolf

They are more concerned about their comfort, their lives, their reputation than your problems, your life and your best.  Recently someone was very rude and hostile to a couple in our church, I was stunned at how strongly I felt about this situation and how firmly I spoke to the individual concerned.  The Lord showed me that I was acting like a good shepherd because I was not concerned about politics and keeping this person happy, I was concerned about protecting the sheep.

Pastors who when the going gets tough go to the golf course, or change church, then maybe they are not the shepherd you are looking for.  Pastoral ministry is tough, I don’t doubt it I know it – but tough times call for tough people who stand up to wolves and stand them down.  When sickness attacks your body you need someone around who can deal with that sickness, not someone singing Doris Day.

I heard recently about a pastor who for a season had to get a secular job.  He was still at the church but when he was working he refused to serve in the church in anyway because it was too hard for him to juggle his work life and church life.  He is now not doing the secular job, but is in full time ministry in that church.

It is going to be very difficult for that man to have a successful pastoral ministry because he hasn’t got a clue what the sheep go through.  In the Tree of Life Network, 15-20% of our church each week serves in some way – making the teas, doing the children’s work, ushering, cleaning up, running Living Churches, and a whole host more.  And all of those people have jobs, families and commitments on top of that.  I know what that feels like, but this pastor doesn’t.  He doesn’t know the sheep – He blew a wonderful opportunity to stand in the shoes of the lay preacher, the Sunday school worker and the ushers and the small group leaders.

As pastors we need to make sure we know the sheep – we understand how hard it is to live in this world and work 9-5.  I pastor in London, and in London people work longer than anywhere else in Europe.  It would be irresponsible to have late night meetings night after night – people have lives as well.  I know that because I have worked in the city.  I know the sheep.

I am not saying you need to know everything about someone or experienced all their problems to minister to them, but I am saying people need to know you are credible and you are authentic and you know where they are coming from and that you have walked in their shoes in some measure.

5. The Good Shepherd is known by the sheep

I get wound up so much by celebrity pastors.  You know, they leave the limo engine running while they run into the church to preach (missing the worship, showing obviously that they are better than you – you need the songs, they just glide in) then run out again without getting any contact with people, and if anyone does come near them then their bodyguards will stop you getting too near.

Peter’s words in his letter resonate so much with me.  He says in 1 Pet. 5.1 that he is a fellow-elder with the other elders.  That means Peter still ran small groups and discipled people!  He was the apostle Peter, who raised the dead and preached to 1000s.  Yet, he never lost touch of the small group and he let people know who he was.  He shared his life with people.

Any good shepherd has people who know him.  People from the flock.  Bible College told me not to make friends in the congregation – they were wrong.  That’s a great recipe for becoming a hireling, but not how to imitate the Good Pastor and be a good pastor.