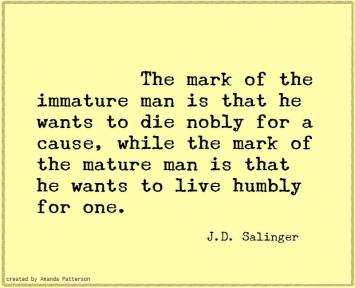 But Samson was also – at the same time- ridiculously immature, and childish. In Judges 15, Samson catches 300 foxes and ties them together in pairs by the tail, then he set fire to the foxes and released them in the Philistine’s farms. That’s because they gave his fiancee to another woman!

That’s not mature behaviour. It’s a childish mind that comes up with the idea to catch hundreds of foxes and tie their tales together. If you want to burn a farm, any adult can give you a hundred easier ways than catching several hundred foxes!

So Samson was mature and immature at the same time – and I, and you, know many Christians who are sadly the same. They know the Word of God really well, but they are childish.  A child is unsteady – one of the hallmarks of a child is they can’t sit still, they have to move around. Childish Christians are always on the move – a new church, a new project, a new ministry.

There are so many child Christians who despite their knowledge of the Word cannot settle in a church. Today you will meet them in one church, tomorrow they will be going to another church. They are unsteady, unstable, yet they have great knowledge. It takes a bit of maturity to go to church!

Another hallmark of a child is they cry really easily. Children get hurt so easily, and cry at the drop of a hat, and need a lot of time and attention. Immature Christians are the same! Childish Christians can know the Bible and be mature in one level, but on the other level need lots of attention or get upset really easily.

We have to be mature in every area of our life – it’s no good being mature in ministry, but immature in the marriage!  We need to settle in marriage, in church, in life and be mature!