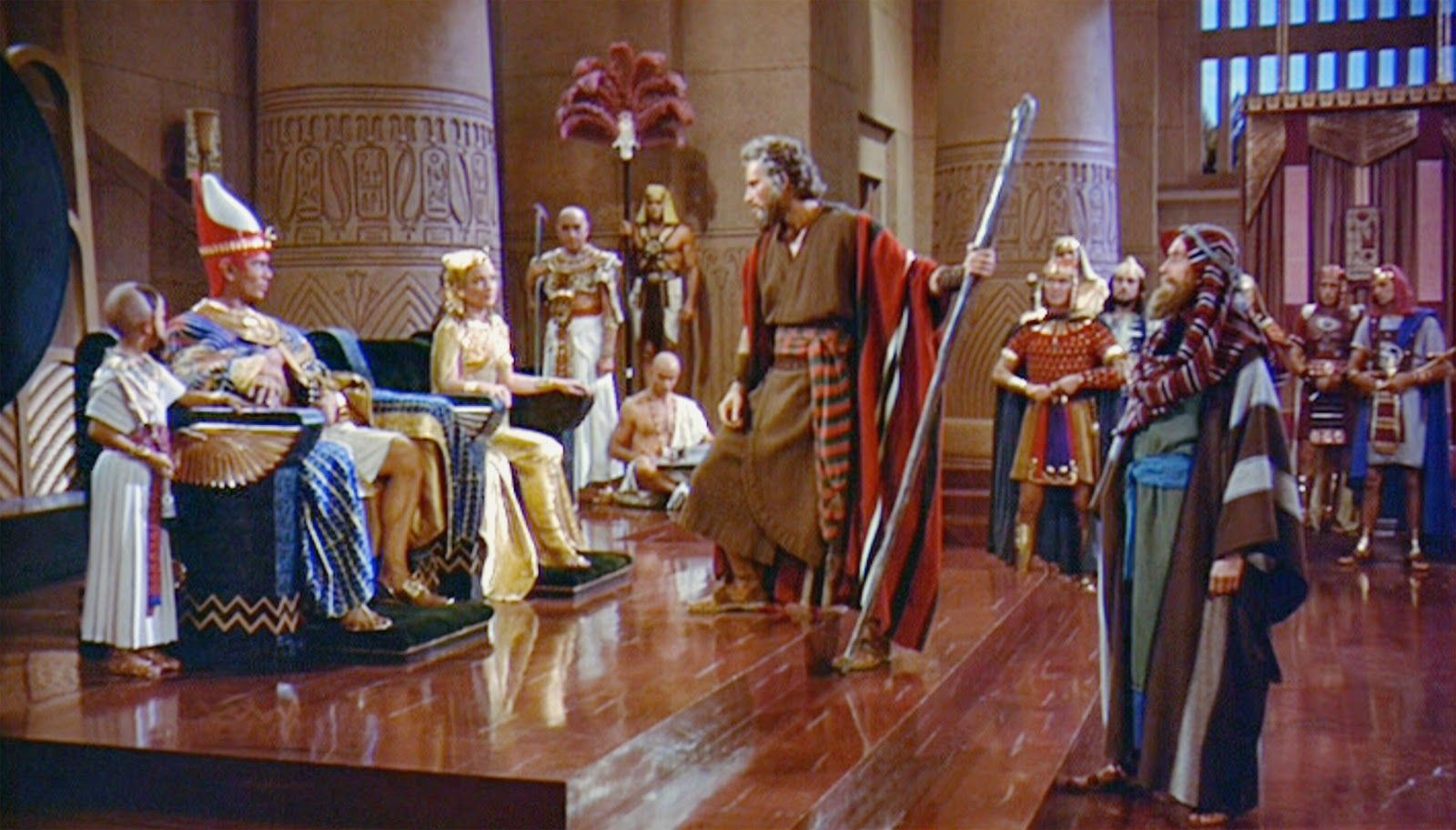 In our last post on Natural Disasters and the Will of God, we found out God did not actually actively send the plagues of Egypt, and we reinforced the fact that the Hebrew permissive sense shows that all God did was withdraw and let the Egyptians reap what they had sown.

I wanted to move on and discuss a few more events in the Old Testament, but I felt it was important to ensure that this whole concept is grounded in the most important revelation of God in all of Scripture, that God is love (1 John 4.16), and that God loves people.  God loved and loves Egypt and loves Egyptians.

We can see from the Scripture that God’s purpose in sending the plagues was to: … show you My power and that My name may be declared throughout the whole earth (Exodus 9.16, AMP).  God’s plan was to show the Egyptians that He loved them and reveal His name and goodness to them.  He wanted Egypt to know that He was the one true God and that He was full of mercy and kindness.

God is not and has never been at war with people, God loves people.  What God is at war with is bad ideas, faulty thought processes, fear, doubt, unbelief – and the demons that often are behind these ideas.  In fact, God also says that the Passover is a judgment against the gods of Egypt (Exodus 12.12).

We have to realize that the world is in the hands of satan (1 John 5.18-19), he is the false god of this world (2 Cor. 4.4) and his function is to blind people to the truth about Jesus Christ and the goodness of God (also 2 Cor. 4.4).  And without people speaking the truth, people stay trapped in the lies.  The plagues were the natural consequence of serving satan!

So many people read the Bible and what they see is through this framework that says that God controls everything and God is sovereign.  Like a game of chess where one person plays against themselves, God sets up Pharoah to knock Him down later to show His great power!  That’s how so many people actually understand the Bible.  That’s so far from what the Bible actually teaches.  God is not raising up people just to show how strong He is by knocking them down.  God is not using the plagues because He is fed up with the Egyptians.  If God was sovereign the way some people teach, He would not have needed ten plagues, He could have done it in a split second.  But the plagues were happening slowly, progressively, because God wanted Egypt to change, to repent, to come to Him for help, to realize His grace and kindness.  God was going to set Israel free from slavery, but He also wanted to set Egypt free as well.  God does not try and win by force, He tries to reveal His love and kindness.  Even while being pushed out of Egypt by their idolatry, and their violence towards Israel, God is still trying to persuade them through Moses and Aaron to know His love and grace.  That is how God operates, not smashing things until people come to serve Him through fear.

God will never and has never redeemed or rescued anyone by forcing them to be redeemed.  He is full of power, but the only forcing God ever does is forcing satan to let His people go!  God wasn’t trying to force Pharoah, He was trying to win Pharoah from satan!  God always attempts to win our hearts.  These plagues were God stepping back from Egypt and letting the people see the true consequences of serving idols and devils without His grace protecting and nourishing them.

For centuries the Egyptians were serving the creation and not the Creator, and now God just let them have the consequences of their idolatry.  What is tragic is that Israel in different times actually also served the false gods of Egypt.  God actually told Joshua when taking the people into the promised land to put away the gods of Egypt (Joshua 24.14).  Entering the promised land is the time to stop worshipping demons pretending to be gods.  You are supposed to be devoted to the Lord and not have false gods!  Worshipping idols will destroy your life, not because God will get you for doing it but because the idols are empowered by demonic forces which will stop at nothing to destroy you.

The Egyptians have one god called Hapi, he was the god over the Nile river.  When God allowed the waters to turn to blood, Hapi’s followers could duplicate that evil with magic, but they could not turn the waters back into water again.  Only God, the redeemer, could turn the waters back and rescue Egypt from the destruction!

The Egyptians worshipped the god of the frogs, Heqet.  Because they had a frog god, the Egyptians could not kill frogs, so they just mulitplied like crazy.  The Egyptians no doubt prayed to the frog god to take the frogs away, but the demons cannot bring life in abundance, they can only steal, kill and destroy.  All of Egypt should now be realizing that the evil gods they served could only make things worse, not better.  They were no match for God, not just in terms of power, but because God is the redeemer, God can bring salvation, God can help us!

One of the things I want all of you to see with the ten plagues is that God is so much more powerful than satan, and that God can stop any plague – and protect His people in the midst of plagues.

When the flies came, we see a noticeable different for the Egyptians and the people of God:

Then the Lord told Moses, “Get up early in the morning and stand in Pharaoh’s way as he goes down to the river. Say to him, ‘This is what the Lord says: Let my people go, so they can worship me. 21 If you refuse, then I will send swarms of flies on you, your officials, your people, and all the houses. The Egyptian homes will be filled with flies, and the ground will be covered with them. 22 But this time I will spare the region of Goshen, where my people live. No flies will be found there. Then you will know that I am the Lord and that I am present even in the heart of your land. 23 I will make a clear distinction between my people and your people. This miraculous sign will happen tomorrow.” (Exodus 8.20-23, NLT)

Now, we have already discussed that “I will send” simply means that God will allow this to happen.  It is sin that brings death, not God.  But, the great news is that God spared His people.  The Hebrew word here translated “spared” is separated (in the KJV, severed).  God can protect His people in the middle of disasters, whereas devils cannot protect their people, even if they cared to.

This happened over and over with God showing that He can protect His people, most dramatically in the death of the firstborn (Exodus 11.4-7), where again God separated His people from the Egyptians.  No matter what kind of plagues hit our world due to the sin, foolishness, idolatry, and selfishness of the people on this planet, God can protect His people, and there is a difference between us and the Egyptians (Exodus 11.7).

Death of the Firstborn

In the case of the firstborn deaths, we see so clearly that satan does not love even people who worship him, and God loves everyone!  And God has the power to protect anyone who comes to Him for help and freedom.

Exodus 12.23 tells us that “The Lord will pass through to smite the Egyptians, and when he seeth the blood on the lintel and on the two side posts, the Lord will pass over the door and will not suffer the destroyer to come into your house to smite you”.  While God, again, using the Hebrew idiomatic language we have discussed previously, He actually tells us the destroyer was the one smiting people.

In Psalm 78, we are told that God “gave them over to the pestilence and smote all the first-born in Egypt”.  This is how God’s wrath manifests, He lets people go their own way.  God allowed satan to do what he wanted to do to the firstborns in Egypt, and God had shown mercy after mercy to Egypt before that happened!

Egypt now reaps from the seeds it had sown when it repeatedly over and over killed the sons of Israel by drowning them (Exodus 1.22).  God was appealing to Pharaoh over and over so they Pharaoh did not have to face this!  God was doing everything He could to stop this happening.  God’s smiting was not personally murdering every firstborn son in Egypt – it was giving them over to the evil angels, that they served and worshipped.  It was letting them face the reality of their choices.  God wants every person in the world to choose life, but He gives everyone the ability to choose.  The Egyptians chose satan, and chose death.

Moses understood this about God when he wrote Psalm 91, that no plague would come near our dwelling.  Jesus, who was fully God, cured many from their infirmities and plagues and evil spirits.  Satan is the cause of sickness, God is the cause of healing.  In these plagues, God only gave permission to the devil to attack, His real passion was to save all of Egypt from satan’s power.  However, because the people had constantly rejected God, He had to allow them to reap what they had sown.

Satan Kills His Own, Not God

It amazes me every time I realize it that the Egyptians were all serving and worshipping satan, and he starts killing his own.  Why?  That is who he is – his nature is to steal, kill and destroy.  Never ever think for a second satan will look after his own, satan is the exact opposite of God, and God loves His own, and God loves satan’s children, and satan hates God’s children and satan hates his own children.  Satan will use people, destroy people – the only thing he loves is himself.  The only person satan looks after is satan.  When satan found out that he could not kill the Israelites, his bloodlust meant he was happy to kill the Egyptians.  Satan doesn’t care, he knows people will still worship him.

But God loves you and me, and God would never do anything to hurt you or me.  God is the deliverer, the one who brings life in abundance.  God is good!  Rest in that today!

Next post, let’s look at Korah, the rebel and see what happened to him.

About Tree of Life Church

View all posts by Tree of Life Church →

One thought on “Natural Disasters and the Will of God 10: The Lord Loves Egyptians”