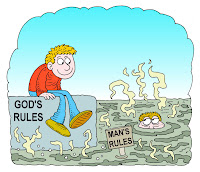 You don’t have to compromise with our sex-saturated culture. By God’s grace you can stay in the sexual safety zone.

There were some raised eyebrows last week on the campus of Southeastern University in Lakeland, Fla., when I hosted a special meeting—the day before Valentine’s Day—on the subject of fornication. That’s not a word you normally associate with a lecture topic, but hey, I had to get attention. And since the hormones on most college campuses are as dense as Florida humidity, I figured the kids would be all ears when I attacked the subject.

I was right. At times you could hear a pin drop in the auditorium, especially when I talked about how most American young people aren’t even sure how to define sexual activity anymore. (Today’s college seniors were nine years old when President Clinton tried to redefine sex during the Lewinsky scandal.) At other times the students burst into nervous laughter, especially when I told how I gave my son-in-law a lecture about sexual boundaries in front of 700 of his classmates when he was dating my oldest daughter.

I thought it might be helpful to share these key points with a wider audience, since many of the readers of this column are single. And even if you are married, it would be good to take a quick refresher course in self-control—since we live in a nation that is losing all moral restraint. Here’s what I told the group at Southeastern:

1. Don’t redefine your morality. I’ve seen Christian young people roll their eyes when I say the word “fornication” because it sounds so much like King James English—sort of like “sodomy,” another word we avoid in our PC culture. But we need to be careful how we bend the meaning of words. Terms that are in the Bible should not vanish from our modern vocabulary just because they offend some of the hosts of The View.

When “fornication” is used in 1 Thessalonians 4:3 (“For this is the will of God … that ye should abstain from fornication” KJV), the Greek word is porneia. It’s the root word for pornography, but it means a lot more than sexually explicit material. It includes sex between unmarried people, homosexuality, bestiality, prostitution, incest and adultery.

According to the apostle Paul, sex as God intended is limited to marriage between one man and one woman. Period. The Episcopal Church has no right to broaden the definition. Neither do Bill Clinton, Newsweek, Oprah or HBO. Don’t let moral relativism infect your brain.

2. Don’t sell your birthright. Losing one’s virginity used to be a serious issue, but today fornication is just a standard sitcom plot device. It’s considered normal. People are considered weird if they didn’t have sex by age 14; and if anybody dares to teach abstinence in a public school he is labeled a Neanderthal.

In TV shows like Desperate Housewives, Nip/Tuck or Grey’s Anatomy, life revolves around who’s in bed with whom. There’s even a TV series on Showtime called Californication that follows the life of a sex addict. What TV producers don’t usually explore are the consequences of immorality. Audiences probably wouldn’t laugh if the couples hooking up on these shows had to deal with genital warts, gonorrhea, AIDS, abortions, post-abortion trauma or clinical depression—all real fallout from illicit sexual behavior.

If you are a single person today—whether you have lost your virginity or not—it’s time to reclaim your purity and save sex for marriage. We’ve forgotten the story of Esau, who forfeited his birthright through one stupid act. He traded his inheritance for a bowl of stew. You really can throw your life away through one act of fornication.

3. Get ruthless with your weaknesses. Jesus sounded stricter than a Catholic school principal when He talked to His disciples about self-discipline. He told them: “If your right eye makes you stumble, tear it out and throw it from you; for it is better for you to lose one of the parts of your body, than for your whole body to be thrown into hell” (Matt. 5:29, NASB).

Jesus was not advocating self-mutilation. He was using sarcasm to emphasize how serious sin is—and He urged His followers to take radical steps to avoid the snares of temptation. In our sex-soaked society, it is more imperative than ever that we draw boundaries.

Got a problem with pornography? If you can’t discipline yourself to avoid offending Web sites, get rid of your computer. Do you end up engaging in heavy petting or intercourse with your girlfriend or boyfriend after a few minutes of kissing? Draw lines and stick to them. And if you can’t stick to the rules, ask for intervention. If you don’t you are headed for spiritual shipwreck.

4. Live a transparent life. The Bible never advocates that we battle sin alone. We need each other. James 5:16 says: “Therefore confess your sins to one another, and pray for one another so that you may be healed.” In some cases you will never get victory over temptation until you share your struggle with another Christian and seek counsel and prayer.

You will never discover the abundant life Christ promised until you clean out your spiritual closets and deal with all your dirty laundry. Total forgiveness and cleansing is available, but confession and repentance must come first.

5. Develop the fear of God. Paul had sober words for the Thessalonians who ignored his admonitions about sexual sin. He told them: “He who rejects this is not rejecting man but the God who gives His Holy Spirit to you” (1 Thess. 4:8). It couldn’t be clearer: If you disregard sexual boundaries, you are on thin ice.

What we desperately need in the church today is a conscience awakening. Too many Christians have warped judgment—and they don’t even feel godly remorse when they break God’s law. If you have any form of sexual sin in your life, flee it immediately and make a 180-degree turn. He will grant you the grace to live a life of purity.