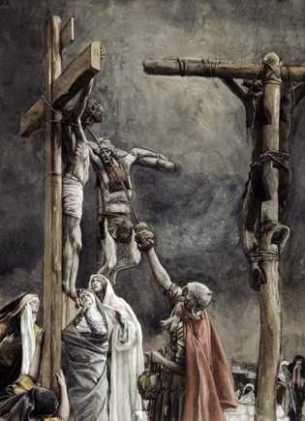 When Jesus had received the sour wine, he said, “It is finished,” and he bowed his head and gave up his spirit.

This is not really a difficult verse – it’s just that there are a number of similar verses in the four gospels, and unless they are all understood it can seem that the Bible is contradictory or implying something that it never said.  This verse, and Matt. 27.34, have both been used by people to suggest that Christians should be for euthanasia and assisted suicide; that in some way Jesus committed suicide on the cross.  In John 19.30, Jesus is offered wine vinegar while on the cross.  Now the thing to remember is that this is the second time Jesus is offered a drink while he is on the cross – the first time he is offered wine mixed with gall and he refuses it.  If you read Mark 15 from beginning to end, you can see clearly Jesus is twice offered drink.  Luke and John only record the second drink, as per our verse here.

The first drink Jesus is offered is wine mixed with gall.  The second drink is wine vinegar.  So the first drink Jesus is offered (Matt. 27.34) he tasted and refused.  What was this drink?  Gall, or bile, is the product of the gall bladder.  It tastes exceptionally bitter and functions like a painkiller.  While on the cross Jesus was offered wine laced with a narcotic to ease his pain, and he refused.  He was going to go through the full pain of your sin, sickness and suffering on the cross to redeem you.  That just shows again how awesome a Saviour, what a champion Jesus was.  He wouldn’t even take an aspirin while dying for you!  He was going to do it!  He would suffer the fullness of sin to be able to offer us the fullness of redemption.  Jesus was fully aware and conscious while he was dying for you! And he planned it that way!

The second drink was wine vinegar, which was a cheap wine, drunk mainly by soldiers.  It was mildly alcoholic but was the kind of drink you could drink quickly, making it useful to the soldiers as they could quickly quench their thirst.  John tells us that Jesus said he was thirsty while on the cross.  Jesus died as a human, fully human, and on the cross was naked, hungry and thirsty.  He became poor with your poverty so you could be made rich (2 Cor. 9.8).  There is nothing poorer than being thirsty and unable to quench your thirst.  Also, thirsting on the cross was prophesied in Psalm 22.15 that the Messiah would have a parched mouth.  In Psalm 69.21 it mentions that the suffering servant would be offered both gall and vinegar.  This all shows how the death of Jesus was exactly how He and His Father planned it.  Now John is the only gospel writer who let us know Jesus actually received the drink – Luke tells us it was offered, but only John tells us he received the drink.  Now drinking at this stage would have actually prolonged Jesus’ life – making the cross more painful and agonizing!  The drink would have extended his suffering, not shortened it.

By confusing the two drinks, some people see Jesus deliberately medicating while on the cross.  They then say it is ok to over-medicate a patient and actively euthanize people.  Nothing could be further from the truth – Jesus rejected the drink that would have eased his pain, and instead chose a drink that extended his pain and suffering.  Why?  Because he was suffering for you!  He died your death and did it deliberately, made it as difficult as possible, ensured he did it with a sound mind – to make sure that he paid the full price for your sin so you could be the righteousness of God in Christ.

That’s not a difficult Scripture – it’s a powerful one!